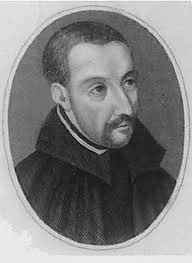 Edmund was born in London, the son of a bookseller. He was raised a Catholic, given a scholarship to St. John's College, Oxford, when fifteen, and became a fellow when only seventeen. His brilliance attracted the attention of such leading personages as the Earl of Leicester, Robert Cecil, and even Queen Elizabeth. He took the Oath of Supremacy acknowledging Elizabeth head of the church in England and became an Anglican deacon in 1564. Doubts about Protestanism increasingly beset him, and in 1569 he went to Ireland where further study convinced him he had been in error, and he returned to Catholicism. Forced to flee the persecution unleashed on Catholics by the excommunication of Elizabeth by Pope Pius V, he went to Douai, France, where he studied theology, joined the Jesuits, and then went to Brno, Bohemia, the following year for his novitiate. He taught at the college of Prague and in 1578 was ordained there. He and Father Robert Persons were the first Jesuits chosen for the English mission and were sent to England in 1580. His activities among the Catholics, the distribution of his Decem rationes at the University Church in Oxford, and the premature publication of his famous Brag (which he had written to present his case if he was captured) made him the object of one of the most intensive manhunts in English history. He was betrayed at Lyford, near Oxford, imprisoned in the Tower of London, and when he refused to apostatize when offered rich inducements to do so, was tortured and then hanged, drawn, and quartered at Tyburn on December 1 on the technical charge of treason, but in reality because of his priesthood. He was canonized by Pope Paul VI in 1970 as one of the forty English and Welsh Martyrs. His feast day is December 1.