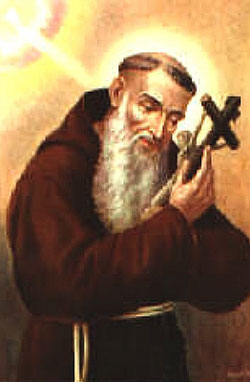 Didacus was a native of the little town of San Nicolas of del Puerto in the diocese of Seville, and his parents were poor folk. Near that town a holy priest led an eremitical life. Didacus obtained his consent to live with him and, though very young, he imitated the austerities and devotions of his master. They cultivated together a little garden, and also employed themselves in making wooden spoons, trenchers and such like utensils. After having lived thus a recluse for some years he was obliged to return to his home, but he soon after went to a convent of the Observant Friar Minors at Arrizafa, and there took the habit among the lay brothers. After his profession he was sent to the mission of his Order in the Canary Islands, where he did a great work in instructing and converting the people. Eventually, in 1445, he, though a lay brother, was appointed chief guardian of a chief convent in those islands, called Fuerteventura. After four years he was recalled to Spain, and lived in several friaries about Seville with great fervor and recollection. In the year 1450 a jubilee was celebrated at Rome and, St. Bernardine of Siena being canonized at the same time, very many religious of the Order of St. Francis were assembled there. Didacus went there with FAther Alonzo de Castro, and at Rome he had to attend his companion during a dangerous illness. His devotion in this duty attracted the notice of his superiors and he was put in charge of the many sick friars who were accommodated in the infirmary of the convent of Ara Caeli. St. Didacus was thus engaged for three months, and is said to have miraculously restored some of his patients. He lived for another thirteen years after his return to Spain, chiefly at the Friaries of Salcedo and Alcala in Castille. In 1463 he was taken ill at Alcala and in his last moments asked for a cord (such as the Friars wear); he put it about his neck and, holding a cross in his hands begged the pardon of all his brethren assembled about his bed. THen, fixing his eyes on the crucifix, he repeated with great tenderness the words of the hymn on the cross, "Dulce lignum, dulces clavos, dulce pondus sustinet", and peacefully died on November 12. Several miracles were attributed to him in his lifetime and many more through his intercession after his death. King Philip II, out of gratitude for one in favor of his son, solicitated the saint's canonization which was decreed in 1588. His feast day is November 13th.