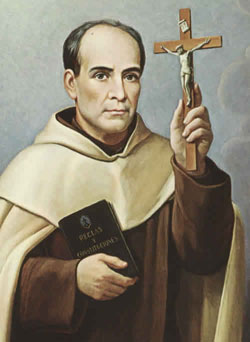 Francisco Palau, of Aytona, Spain, was a Discalced Carmelite preparing for the priesthood in the order's Barcelona monastery when it was destroyed by fire in 1835. A year later, he was ordained at the age of twenty-four. Anti-clerical unrest in Spain precluded the re-opening of the Carmelites' monastery. Hence Father Francisco had to live his Carmelite spiritual life privately, alternately devoting himself to pastoral works and to prayerful solitude. After founding a catechetical organization, he was exiled by the government to the Spanish island of Vedra in 1854, having been falsely accused of fomenting labor unrest. Following the end of his exile in 1860, he received a mystical experience in which he perceived in a profound manner the Church as she to whom he had personally given his life. Hence, to the Church he addressed these words regarding his ordination: "On the day I was ordained to the priesthood, I was consecrated through ordination to your service...I am yours with all that I do, all that I am and possess." Father Palau founded two Carmelite congregations. He died on March 20, 1872.