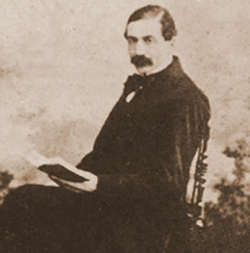 Francesco Faŕ di Bruno (29 March 1825-27 March 1888) was an Italian mathematician and priest, born at Alessandria. He was of noble birth, and held, at one time, the rank of captain-of-staff in the Sardinian Army. He is the eponym of Faŕ di Bruno's formula. In 1988 he was beatified by Pope John Paul II.

Coming to Paris, he resigned his commission, studied under Augustin Cauchy, and Urbain Le Verrier, who shared in the discovery of the planet Neptune, and he became intimate with Abbé Moigno and Charles Hermite. On his return to Turin, he was ordained, but the remainder of his life was spent as Professor of Mathematics at the University. In recognition of his achievements as a mathematician, the degree of Doctor of Science was conferred on him by the Universities of Paris and Turin.