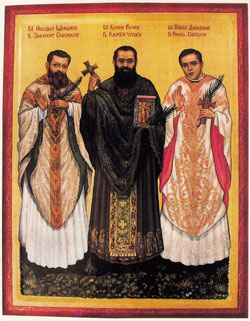 Robert Matthew Chichov, of Plovdiv, Bulgaria, entered the Assumptionist congregation at the age of sixteen, taking the religious name Josaphat. A talented musician, he was assigned to conduct a college band while serving at the Assumptionists' College of Saint Michael in Varna. Josaphat was ordained a Roman Rite priest at the age of twenty-five. Over the years that followed, he served as a parish priest, a convent chaplain, a college professor, a Catholic writer, and the superior of a seminary. A gifted homilist, Father Chichov was a promoter of family devotion to the Sacred Heart of Jesus. Not averse to modern means of communication, he utilized a phonograph player and a film projector to instruct his students. In December of 1951, Father Chichov was arrested by Communist troops. On September 29, 1952, he was put on trial for his faith together with thirty-nine other Catholic priests, religious, and lay people. On November 11, Father Chichov was executed together with his fellow Assumptionists, (Blesseds) Kamen Vitchev and Pavel Djidjov.
Continue reading about Bl. Josaphat Chichov