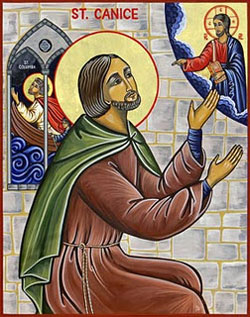 A native of Glengiven, Ireland, Canice, an abbot of great virtue, preached across Ireland and Scotland. He was a close friend of the missionary priest, Saint Columba of Iona, and witnessed several prodigies in the life of the latter. In one instance, a pagan king who had refused to open his gates to Columba was startled to see the bolts unfastened and the gates opened by unseen hands after Columba had made the sign of the cross. On another occasion, Canice was among those who saw a fiery globe of light appear over the head of Columba as he was consecrating the Eucharist, remaining thus until the end of the Mass. One day, as Canice was eating, he heard in his heart the voice of Columba, who at that moment was aboard a ship foundering in a storm at sea. Canice thereupon ran to the chapel so hastily that he lost one shoe. As Canice knelt to pray for his friend, miles away Columba watched the churning sea around him suddenly subside. Having seen in a vision Canice's dash to the chapel, Columba thanked him in his heart, saying, "Your swift course to the church with one shoe exceedingly assists us."
Continue reading about St. Canice