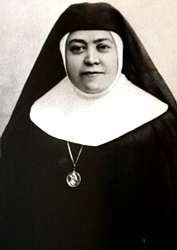 Bonifacia Rodriguez Castro, of Salamanca, Spain, supported her widowed mother by working as a cord-maker. Thereafter she opened a shop in their home. Each Sunday, Bonifacia used the shop-room as a spiritual meeting place for young women intent upon escaping the temptations of the immoral entertainments to which they were exposed elsewhere. Placing themselves under the patronage of Mary and Joseph, Bonifacia and her friends thus began their "Association of the Immaculate and Saint Joseph." It grew into a new religious congregation, the Servants of Saint Joseph, devoted to the spiritual formation and protection of women factory workers. But only eight years after co-founding the congregation, Sister Bonifacia was unjustly removed from the office of mother superior after some of the nuns turned against her. She received episcopal permission to begin a new convent in Zamora, but the Salamanca community refused to be reconciled with her. On August 8, 1905, Sister Bonifacia died. Less than two years later, the Salamanca and Zamora communities were united into the single congregation that she had hoped and prayed for.
Continue reading about St. Bonifacia Rodriguez y Castro