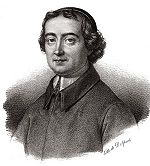 Also known as Bonet, Bonitus was born in Auvergne, France. He became chancellor of Sigebert III of Austrasia, was appointed governor of Marseilles by Thierry III in 667, and was named Bishop of Clermont in 689. He resigned the See because of doubts about the validity of his election, led a life of holiness as a hermit at the Benedictine Abbey of Manglieu at Clermont, and died at Lyons while returning from his pilgrimage to Rome. His feast day is January 15th.