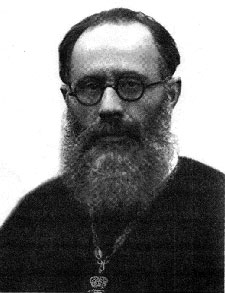 Mykola Charnetsky, of Semakivtsi, Ukraine, was ordained a Byzantine Rite Catholic priest at the age of twenty-four. Over the years that followed, he served as a seminary professor and spiritual director. Five years after his appointment as apostolic visitor for the Byzantine Rite Catholics of Volyn and Polissia, Father Charnetsky was consecrated a bishop in 1931 at the age of forty-six. In 1945, the Russian Communists' secret police (the KGB) arrested Bishop Charnetsky and sentenced him to a six-year term of hard labor in Siberia. Transferred numerous times, he served his sentence in thirty different prisons and labor camps, and was subjected to six hundred hours of interrogations and torture. Upon being diagnosed with a terminal illness, he was released in 1956. Nearly three hundred priests who had previously yielded to the Soviet government's demand that they defect to the state-controlled Russian Orthodox Church came to Bishop Charnetsky to confess their sins and be reconciled with the Catholic Church. The lingering effects of Bishop Charnetsky's earlier imprisonment led to his death on April 2, 1959.