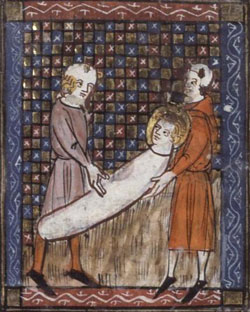 Vitalis was a martyr venerated from an early date in Milan, Italy. The details of his life are not known for certain. A legendary account describes him as a Christian Roman soldier from Milan who encouraged the Christian physician (Saint) Ursicinus to persevere in professing his faith after he had wavered out of fear of execution. Consequently, Vitalis himself was tortured on a rack and buried alive. Vitalis' wife Valeria died after being attacked by a pagan mob near Milan.
Continue reading about Sts. Vitalis and Valeria

Celebrations of the Word in the Year of St. Paul