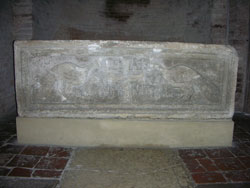 Martyr, also called Agricola, put to death in Bologna, Italy, to whom the basilica of San Vitale in Ravenna was dedicated. According to one legend, Vitalis was the slave of St. Agricola and a dedicated Christian. Arrested and condemned for his faith, Vitalis faced his death with such aplomb that Agricola was converted and accepted his own crucifixion. In another legend, Vitalis was a relative of Agricola. The cult began when thc remains of two martyrs were discovered in Bologna and St. Ambrose of Milan and Eusebius of Bologna attached some story to the relics. Owing to the questions related to the details of the martyrs' lives, their cult was confined in 1969 to local calendars.