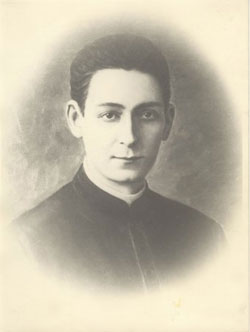 Born in Paris, Augusto Czartoryski was a young prince of the Polish royal family exiled to France by the Russians occupying their country. Devout and pure from his youth, Augusto exhibited a deep spirit of prayerful recollection. In 1883, (Saint) John Bosco came to celebrate Mass in the Czartoryski family's private chapel in Paris. He was served at the altar by the twenty-five-year-old Augusto. This meeting inspired in the young man a resolution to enter Don Bosco's congregation, the Salesians. In 1892, Augusto was ordained a Salesian priest at the age of thirty-three. Augusto's father did not attend the ordination, having opposed his decision to enter religious life, but a month later, he relented and came to see his newly ordained son. Father Czartoryski fully embraced his congregation's life of personal poverty and its apostolate of serving the poor. Content in his vocation, he declared: "I continue to live in the congregation with an immense peace of spirit." Only a year after his ordination, Father Czartoryski died of tuberculosis, uttering, "Jesus Christ, my Master," before breathing his last.
Continue reading about Bl. Augusto Czartoryski