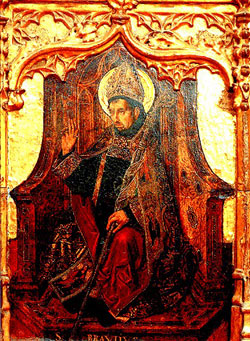 ST BRAULIO, BISHOP OF SARAGOSSA (A.D. 651) At the college founded in Seville by St Isidore, one of the more promising of the alumni was a boy of noble birth called Braulio, who grew up to be so eminent a scholar that Isidore regarded him as a friend and disciple rather than a pupil, and used to send him his own writings to correct and revise. Braulio prepared for the priesthood and was ordained, and when in 631 the see of Saragossa became vacant at the death of his brother Bishop John, the neighbouring prelates assembled to elect a successor and their choice fell upon Braulio. As a pastor, St Braulio laboured zealously to teach and encourage his people, and at the same time to extirpate the Arian heresy which continued to flourish even after the conversion of King Reccared. He kept in close touch with St Isidore, whom he assisted in his task of restoring church order and regularizing ecclesiastical discipline: a small portion of the correspondence between the two saints has survived. He took part in the fourth Council of Toledo, which was presided over by his friend and master St Isidore, and also in the fifth and sixth. The last-named assembly charged him to write an answer to Pope Honorius I, who had accused the Spanish bishops of negligence in the fulfilment of their duties. His defence was dignified and convincing. The good bishop s duties did not prevent his constant ministrations in his cathedral church and in that of our Lady ‘del Pilar , where he spent many hours of the day and night in prayer. Luxury of all kinds he abhorred: his garments were rough and plain, his food simple and his life austere. An eloquent preacher and a keen controversialist, he could carry conviction by his telling arguments and absolute sincerity. His liberality to the poor was only matched by his tender care of all his flock. The close of his life was saddened by failing eyesight—a heavy trial to anyone, but especially to a scholar. As his end drew near, he realized that he was dying, and the last day of his life was spent in the recitation of psalms. His feast day is the March 26.