Feastday: June 17
Patron: of the patron saint of travellers and farming
Death: 680 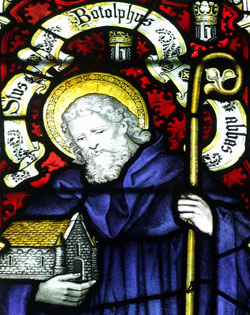 Sts. Botulph and Adulph were two noble English brothers, who opened their eyes to the light of faith in the first dawning of the day of the gospel upon our ancestors. Astonished at the great truths which they had learned, and penetrated with the most profound sentiments which religion inspires, they traveled into the Belgic Gaul, there to find some religious houses and schools of virtue, which were then scarce in England. Such was the progress of these holy men that they soon were judged fit to be themselves masters. Nor was it long before Adulph was advanced to the bishopric of Maestricht, which he administered in so holy a manner, that he is honored in France among the saints on the 17th of June. St. Botulph returned to England to bring to his own country the treasure he had found. Addressing himself to king Ethelmund, he begged some barren spot of ground to found a monastery. The king gave him the wilderness of Ikanho where he built an abbey, and taught the brethren whom he assembled there the rules of Christian perfection, and the institutes of the holy fathers. He was beloved by everyone, being humble, mild, and affable. All his discourse was on things which tended to edification, and his example was still far more efficacious to instill the true spirit of every virtue. When he was oppressed with any sickness he never ceased thanking and praising God with holy Job. Thus he persevered to a good old age. He was purified by a long illness before his happy death, which happened in the same year with that of St. Hilda, 655. His monastery having been destroyed by the Danes, his relics were part carried to the monastery of Ely, and part to that of Thorney. St. Edward the Confessor afterwards bestowed some portion of them on his own abbey of Westminster. Few English saints have been more honored by our ancestors. Four parishes in London, and innumerable others throughout the country, bear his name. Botulph's town, now Boston, in Lincolnshire and Botulph's bridge, now Bottle-bride, in Huntingdonshire, are so called from him. Leland and Bale will have his monastery of Ikanho to have been in one of those two places; Hickes says at Boston; others think it was towards Sussex; for Ethelmund seems to have been king of the South -Saxons. Thorney abbey was situated in Cambridgeshire, and was one of those whose abbots sat in parliament. It was founded in 972, in honor of St. Mary and St. Botulph. In its church lay interred St. Botulph, St. Athulf, St. Huna, St. Tancred, St. Tothred, St. Hereferth, St. Cissa, St. Bennet, St. Tova, or Towa, to whose memory a fair chapel called Thoueham, half a mile off in the wood, was consecrated. Thorney was anciently called Ancarig, that is, the Isle of Anchorets. Part of the relics of St. Botulph was kept at Medesham, afterwards called Peterburgh. See Dr. Brown Willis, on mitered Abbeys, t. 1, p. 187, and the life of St. Botulph publisher! by Mabillon, Act. Ben. t. 3, p. 1, and by Papebroke, t. 3, Junij, p. 398. The anonymous author of this piece declares he had received some things which he relates from the disciples of the saint who had lived under his direction. There is also in the Cottonian library, n. l l l, a MS. life of Saint Botulph compiled by Folcard, first a monk of St. Bertin's at St. Omer, afterwards made by the conqueror abbot of Thorney in 1068. See also Narratio de Sanctis qui in Anglia quiescunt, translated from the English-Saxon into Latin by Francis Junius, and published by Dr. Hickes, Diss. Epist. pp. 118, l l 9. Thesauri, t. 1.