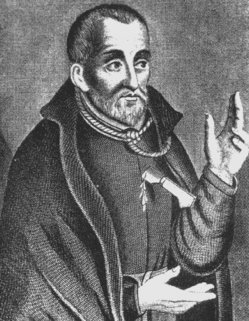 When in 1566 England's Queen Elizabeth I visited Oxford University, she was very impressed by a twenty six-year-old Protestant scholar chosen to greet her with a salutary speech, Edmund Campion. But soon, the study of the Church Fathers' works would lead the young man to begin questioning his Protestant beliefs. Journeying to Douai, France in 1572, Edmund converted to the Catholic faith and began studying for the priesthood. A year later he entered the Jesuit Order in Rome. As a novice, he experienced in a garden a vision of the Blessed Virgin Mary foretelling his martyrdom in England. In 1580, three years after his ordination, Father Campion returned to England. He preached one to three times a day, mentally preparing his homilies while traveling on horseback across the English countryside, winning many converts. In July of 1581, Father Campion was captured by the Elizabethan authorities. He suffered torture on a rack before being sentenced to death in November. On December 1, 1581, he was executed by drawing and quartering at Tyburn, London.