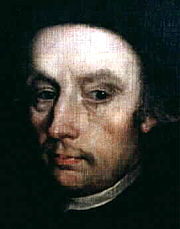 St. Edmund Arrowsmith (1585 - 1628) Edmund was the son of Robert Arrowsmith, a farmer, and was born at Haydock, England. He was baptized Brian, but always used his Confirmation name of Edmund. The family was constantly harrassed for its adherence to Catholicism, and in 1605 Edmund left England and went to Douai to study for the priesthood. He was ordained in 1612 and sent on the English mission the following year. He ministered to the Catholics of Lancashire without incident until about 1622, when he was arrested and questioned by the Protestant bishop of Chester. He was released when King James ordered all arrested priests be freed, joined the Jesuits in 1624, and in 1628 was arrested when betrayed by a young man he had censored for an incestuous marriage. He was convicted of being a Catholic priest, sentenced to death, and hanged, drawn, and quartered at Lancaster on August 28th. He was canonized as one of the Forty Martyrs of England and Wales by Pope Paul VI in 1970. His feast day is August 28th.