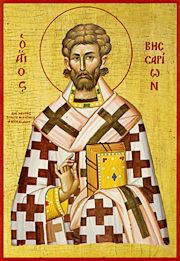 Bessarion is greatly venerated in the East, where his name in various forms is sometimes given in Baptism; e.g. Joseph Stalin's father was called Vissarion. He was a native of Egypt, and having heard the call to perfection he went into the wilderness, where he was a disciple first of St. Antony and then of St. Macarius. We are told that rather than live under a roof he wandered about like a bird, observing silence and subduing his flesh by mighty fasting; he is said to have once gone forty days without food, standing in prayer amid brambles. His neighborly charity led him to a height of perfection that was manifested by miracles: he made saltwater fresh, he several times brought rain during drought, he walked on the Nile, he overcame demons. Like so many other desert fathers, St. Bessarion lived to a great age; and he was compared by his admirers with Moses, Joshua, Elias, and John the Baptist. St. Bessarion is named in the Roman Martyrology on June 17th, but his usual date in the East is June 6th.