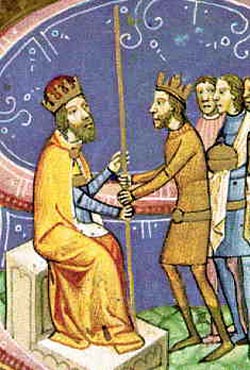 Peter Orseolo, of Rivo Alto, Italy, served as commander of the Venetian navy before becoming doge of Venice in 976. In this office he rebuilt the fire-ravaged Saint Mark’s Cathedral, funding the work from his own wealth. From Constantinople he obtained for the cathedral’s high altar what is considered the earliest known example of a gold altar cloth. He also founded a hospice for pilgrims. But after governing for only two years, Peter suddenly disappeared from the city during the night of September 1-2, 978. He fled his prestigious station to devote the rest of his life to God, traveling over five hundred miles westward to enter the Benedictine monastery of Cuxa, at the foot of the eastern Pyrenees, along the French-Spanish border. As he neared the monastery, Peter took off his shoes and walked the remaining steps of the journey bare-footed. As a monk, he excelled in humility, devotion to prayer, charity, and self-denial. Thereafter, Peter’s zeal for even greater perfection prompted him to obtain permission to live in solitude a short distance from the monastery.