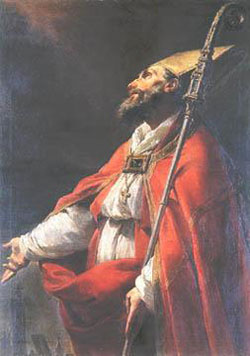 Bishop of Bologna. The son a Roman praetorian prefect named Petronius in Gaul, he was most likely a Roman official who went to Palestine and visited the holy places. Influenced by the visit, he entered the priesthood and later became bishop of Bologna about 432. His two main achievements were the repair of the many buildings and churches destroyed by the Goths during their invasion of the Western Empire and building the monastery of St. Stephen in the design of the sacred sites of the Holy Land. Petronius figured in a fictitious life which was immensely popular during the Middle Ages.

4 1/2" St. Catherine of Siena Pewter Statue on Base