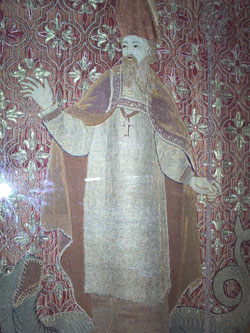 Welsh bishop. Probably of Roman-Welsh descent, he was the son of a local Welsh chieftain. He studied under St. Illtyd at the Ynys Byr monastery and, according to tradition, was granted permission to become a hermit. Ordained, he nevertheless gathered around himself a group of followers and acquired such a reputation for goodness that a king in Brittany asked him to preach the Christian faith to his subjects. Paul sailed to Caldey Island in Brittany soon after and founded a monastery at PorzPol on the island of Quessant. Later he established himself and his followers at Ouismor. There, over his objections, he was made a bishop, although he was finally permitted to resign after several years and retire to Batz. He was reputed to be able to perform miracles, the accounts of which are generally considered unreliable owing to the exorbitant nature of the claims.