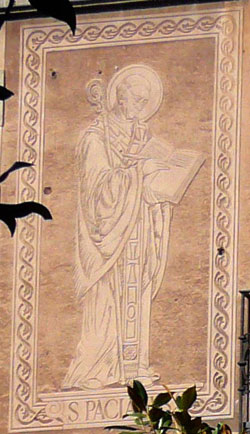 Bishop of Barcelona.A Spaniard by birth, he became bishop in 365. Little is known about his life beyond his extensive writings, which are themselves extant only in part in three letters and a short treatise, Paraenesis ad Poenitentiam. Among the topics he examined in his writings are ecclesiastical discipline, Baptism, papal supremacy, and orthodox teachings on penance against the heresy of Novatianism, which were then flourishing in Spain. He is also remembered for including in one of his letters the phrase Christian us mihi nomen est, catholicos vero cognomen. In De Viris Illustribus, St. Jerome praised Pacian for his eloquence and deep sanctity. Pacian's son, Flavius Dexter, became a praetorian prefect under the Western Roman Emperor Honorius.