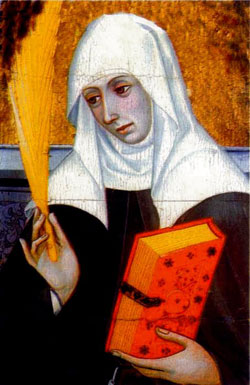 Delphina was born at Chateau Puy Michel, Languedoc, France. She married St. Elzear when both were sixteen and lived a life of personal piety with him that caused them to be considered an ideal married couple. She accompanied Elzear to Naples in 1317 and became a companion to Queen Sanchia, a position she continued after the death of her husband on a diplomatic mission to Paris in 1323. When Queen Sanchia's husband, King Robert, died, the queen became a nun at a Poor Clare monastery in Naples, and Delphina remained with her until her death, when she returned to Provence. She gave most of her wealth to the poor and lived as a recluse, at first at Carbrieres and then at Apt. She died in 1360 and was buried with her husband at Apt. An old tradition says that both St. Elzear and Blessed Delphina were members of the Third Order of St. Francis, and they are therefore particularly venerated by the Franciscans; in their supplement to the Martyrology, Blessed Delphina is named on December 9, though she appears to have died on November 26th.