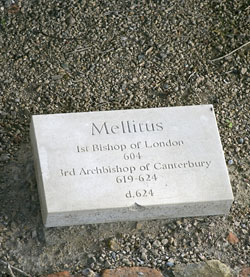 Archbishop of Canterbury from 619. In 601, he was sent from St. Andrew's Monastery, Rome, to England by Pope St. Gregory I the Great. Mellitus spent three years as a missionary in Kent, England, aiding St. Augustine. He also became the first bishop of London and was responsible for converting the King of the East Saxons. The Saxons, however, exiled him in 616 over some conflict, but Mellitus returned to England and was named archbishop of Canterbury, in succession to St. Lawrence. Tradition states that he saved Canterbury from a disastrous fire with his prayers.