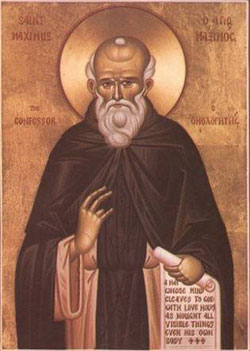 Abbot, mystic, and Doctor of the Church, called "the Theologian," who suffered persecution from Emperor Constans II and the Monothelitist heretics. He was born to a noble family in Constantinople, modern Istanbul, about 580 and served for a time as secretary to Emperor Heraclius before becoming a monk and abbot at Chrysopolis, modern Skutori, Turkey. When Emperor Constans II favored Monothelitism, Maximus defended Pope Honorius and debated and converted Pyrrhus in 645. He then attended the Lateran Council in 649, convened by Pope St. Martin I, and he was taken prisoner and brought to Constantinople, where he was charged with treason. Exiled from the Empire, he spent six years at Perberis and was brought back to Constantinople with two companions - both named Anastasius - to be tortured and mutilated. Their tongues and right hands were cut off and they were sent to Skhemaris on the Black Sea, where Maximus died. He is venerated for his mysticism and is ranked as one of the foremost theologians of his era, being especially noted for his contributions to the theology of the Incarnation. The author of some ninety works on theology, mysticism, and dogma, he is especially known for his Opuscula Theologica et Poleinica; the Ambigua on Gregory of Nazianzus, and the Mvstagogia, an examination of symbolism.