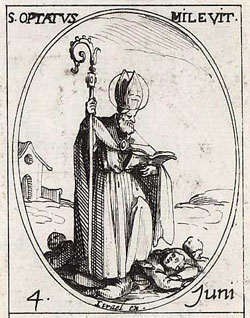 Bishop of Milevis, Numidia, in Africa.A convert from paganism, he is best known for his opposition to the heresy of Donatism and his six treatises composed against them. One of them, Against Parmenian, is still extant, and was mentioned by St. Jerome in his De Viris Illustribus as having been composed in six books. The treatise stresses the need for unity and is conciliatory in tone, but it criticizes Donatist teachings on Baptism, and stresses that the Church cannot be limited to Africa but is "catholic." Optatus was much praised by such contemporaries as Augustine and Fulgentius of Ruspe.