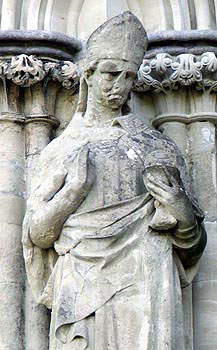 Archbishop of Canterbury, also known as Odo of Canterbury. Born to Danish parents in East Anglia, he joined a Benedictine monastery at Fleury-sur-Loire and then was appointed bishop of Ramsbury, in Wessex. In 937, Odo was present at the Battle of Brunabur where King Athelstan of Wessex defeated a force of Scots, Danes, and Northumbrians. In 942, Odo became archbishop of Canterbury, wielding both secular and spiritual authority with fairness and deep concern for the welfare of the people. He assisted in the formulation of the legislation of Kings Edmund and Edgar the Peaceful, created as a separate diocese the region of East Anglia, and gave his blessings to the monastic reforms of St. Dunstan at Glastonbury, thereby promoting the revival of monasticism in England. Known as "the Good" because of his famed holiness, he was also credited with miracles.