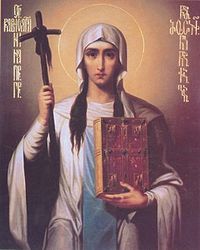 Virgin and the Apostle of Georgia, also listed as Christiana. According to custom, she was born in Cappadocia and became a slave. Taken to Iberia, she won the respect of many locals with her patience and goodness and by the miracles she supposedly performed. Brought to the royal palace, she converted the king and queen who then requested that the Roman Emperor Constantine the Great send missionaries and bishops. After helping to found the Church in Georgia, Nino retired to the life of a hermitess, spending the rest of her life in prayer. While there is no doubt about her historical existence or her work, Nino has been the subject of numerous tales and legends.