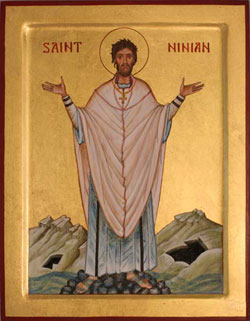 According to the untrustworthy life of Ninian by St. Aelred, he was the son of a converted chieftain of the Cumbrian Britons, studied at Rome, was ordained, was consecrated a bishop and returned to evangelize his native Britain. He had his own church built by masons from St. Martin's Monastery in Tours, which became known as The Great Monastery and was the center of his missionary activities. From it Ninian and his monks evangelized neighboring Britons and the Picts of Valentia. Ninian was known for his miracles, among them curing a chieftain of blindness, which cure led to many conversions. His feast day is September 16.