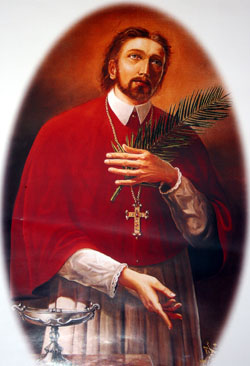 Martyr of Hungary, sometimes called Mark Crisin. He was born into a famed Croat family and studied at the Germanicum in Rome. Ordained, he returned to Hungary and became a canon at Esztergom. He was assigned to missionary work near Kosice, Slovakia, with two Jesuits - Hungarian Stephen Pongracz and Melchior Grodecz, a Czech. In 1619 they were taken prisoner by invading Calvinist troops under George Racoczk. Tortured, Marek and his companions were martyred. They were canonized in 1995 as the Martyrs of Kosice by Pope John Paul II.