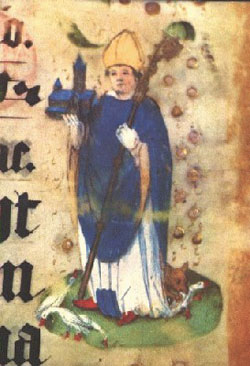 Benedictine bishop, founder of Munster, Germany, and counselor of Charlemagne. He was born in Zuilen, Holland, and was trained by St. Gregory at Utrecht. Going to England, Ludger studied under Blessed Alcuin at York. He was ordained in 777 in Cologne, Germany, and spent seven years as a missionary. In 785 he met Charlemagne and was given charge of the spiritual direction of five provinces. He refused the see of Trier but became the founding bishop of Munster in 804. Ludger died on March 26 after celebrating Mass at Butterbreck, Westphalia.