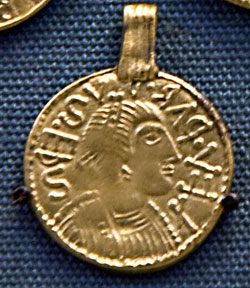 Bishop and chaplain to Queen Bertha, daughter of King Charibert of Paris, France. When Bertha went to England to marry King Ethelbert of Kent, Liudhard accompanied her. He played an important role in King Ethelbert's conversion and Baptism by St. Augustine of Canterbury. Liudhard, also called Liphard and Letard, was buried at Canterbury.