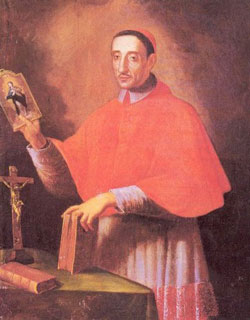 Bl. Giuseppe Maria Tommasi, 1649-1713, cardinal. Son of the duke of Palermo and of Rosalia Traino, both of whom later entered religious life, as did four of his sisters,, he was born in Alicati, Sicily, on Sept. 12 and entered the Theatine novitiate at Palermo at fifteen. After 1673 he was stationed at San Silvestro in Rome, studying scripture, Hebrew, and Greek philosophy. He wrote scholarly treatises on the Psalms and on liturgy. In 1697, Pope Innocent XII called hyim to the Vatical, where he worked for reforms among religious orders and continued his interest in theology and music and relief of the poor. He became a cardinal shortly after Clement XI, whose confessor he had been, became pope. He died in Rome, and was beatified in 1803.F.D. Jan 1