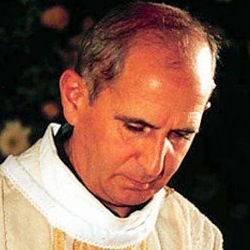 Blessed Fr. Don Giuseppe "Pino" Puglisi was beatified on May 25, a mere 20 years after his martyrdom at the hands of the Sicilian Mafia. His beatification represents a new era of defiance of powerful organized crime families in Italy and around the world.

Don Giuseppe "Pino" Puglisi was born on September 15, 1937 in the Palermo neighborhood of Brancaccio, in Palermo, Sicily. His father was a cobbler and his mother made dresses. From this working class home, Puglisi learned the roughness of his crime-ridden neighborhood and refused to participate in the petty criminal activity on the streets.

He joined the seminary at the youthful age of 16, with an aim to become a priest and fight back against rampant crime and corruption.

In 1960, at the age of 23, Puglisi was ordained a priest and sent to work in various parishes. His archbishop, Cardinal Ernesto Ruffini had a passive attitude towards the Mafia, even claiming at one time that they were fictional, and that nobody knew what the Mafia really was. "So far as I know, it could be a brand of detergent," he once denied.

Cardinal Ruffini argued that communism was the greater threat to the people and that the Mafia was simply part of the fabric of local society.

However, Fr. Puglisi was well aware of the Mafia influence in his parish and suggested that Cardinal Ruffini needed to be corrected, albeit he added we "should always criticize it [the Church] like a mother, never a mother in law."

In the years following, he served in various parishes, criticizing the criminal culture and calling on children to attend school and refrain from vice.

Fr. Puglisi was especially renown for his humor as well as his tough stance against the Mafia. He refused money from the organization and denied awarding a contract to repair his church roof to an organization the Mafia "recommended."

In 1990, he had returned to his native Brancaccio and became priest at San Gaetano's Parish. He continued to speak boldly against the Mafia. He asked the authorities to move against known Mafia members and publicly denounced their activities.

He refused to permit known Mafia gangsters from marching at the head of religious processions, a Mafia tradition, and was the first known priest to confront men attempting to do so.

Unable to control him with money or intimidation, Fr, Puglisi became a target for the organization.

On September 15, 1993, two hitmen approached him in front of his parish. Fr. Puglisi spoke his last words, greeting the men saying, "I've been expecting you." One of the men then fired a single bullet at point-blank range, rendering him unconscious.

The bold priest was rushed to the hospital where doctors could not revive him. He died on his birthday.

Following his death, there was a loud public outcry for justice. Anti-Mafia graffiti was painted across the region with his signature quote, "And what if somebody did something?"

The hitmen and their associates who were sent to kill Puglisi were eventually arrested and the gunman, Gaspare Spatuzza, confessed to the killing. He, along with three other men were given life sentences in 1998 for murdering the priest.

Church leaders, now emboldened by the anger of the people and the arrest of Puglisi's murderers, began to join the outcry and the Mafia lost influence across the region. In 1999, the Cardinal of Palermo initiated the beatification process for Puglisi, saying he was a "servant of God." He also warned the people against remaining silent about Mafia activities.

The beatification of Fr. Puglisi took place on May 25, 2013 with a Mass performed by the Metropolitan Archbishop of Palermo, Cardinal Paolo Romero.

Pope Francis, who was unable to attend the Mass because of a previous engagement, called Fr. Puglisi a martyr and an exemplary priest. He also condemned the Mafia and all criminal organizations.