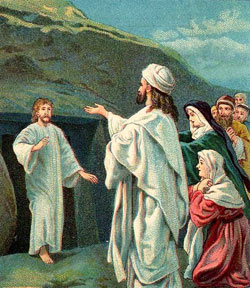 The disciple and friend of Jesus raised from the dead by Jesus. He was the brother of Martha and Mary, and resided in Bethany, a suburb of Jerusalem, Israel. No mention is made in the New Testament of his activities after being brought back to life, but several traditions survive. In one, Lazarus, Martha, and Mary go to France, where he became the first bishop of Marseilles, before being martyred. In other traditions, Lazarus and his sisters went to Cyprus, where he became bishop of Kition, or Lamaka. Still another legend reports that he went to Syria. His supposed relics were translated to Constantinople and numerous churches were built in his honor. Devotion to Lazarus was commonplace in the early Church.