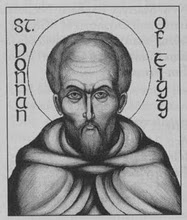 ST. Donan a remarkable fact about the widespread work of the Celtic missionary saints from the fifth century onwards is that scarcely any cases of violent opposition or martyrdom are recorded until the Viking and Danish raids began at the end of the ninth century. The pagan Celts accepted the missionaries even when they did not accept their religion and pagan and Christian symbols are found side by side on the great pictish stones.

Donan (or Donnan) deserves a note in these pages not only because of the extent of his journeyings but because he and his fellow monks on the island of Eigg provide the most dreadful case of martyrdom in the history of the Celtic Church. He and fifty-two of his followers were butchered within the refectory of the monastery. The only other martyrdoms recorded seem to be those of Constantine of Kintyre and of Kessog, and the latter is doubtful.

Unfortunately the mediaeval Life of Donan is lost, and what little we know of him is limited to the brief comments in such ancient martyrologies as Tallaght, Donegal and Oengus. The date of his birth is not known but he was contemporary with, or a little younger, than Columba. We presume that he was Irish and early in adult life crossed to Galloway. Thereafter we only know him through a chain of Kildonans up the west coast of Scotland, beginning with a Kildonan at Kirkmaiden and a Chapel Donan at Kirkcolm, and terminating at Kildonan on the island of Little Bernera in the Outer Hebrides.

The story of Donan's martyrdom was by no means unknown in mediaeval Scotland and some commemorations might be due to later interest and veneration. But the plotting of the place-names suggests a logical route of missionary progression northwards. The only St Don- nan's east of the Great Glen is at Auchterless in Aberdeenshire, and it has been suggested that Donan had a special connection with this parish-there are several place-names and we know his 'bachail' or staff was kept there till the Reformation. Perhaps for this very reason the saint's personal connection with Auchterless is more open to doubt, as the possession of the bachail in mediaeval days might well lead to the name instead of vice versa.

Only one incident is recorded as happening during these missionary years. He crossed to lona to meet Columba, and according to the story, asked that saint to act as his 'anamchara' or 'soul- friend', which took the place of the Roman Church's 'confessor'. Strangely enough, Columba refused to act as anamchara, saying, 'I shall not be a soul-friend to a company of red-martyrdom.' Obviously some explanation must be sought for this abrupt refusal. Dr A. B. Scott, who disliked Columba, saw in it the Goidheal's refusal to have any friendly intercourse with a Pict, but there could be quite different reasons, such as Columba's unwilling-ness to accept the additional responsibility which the duty entailed.

Donan eventually formed his community on the small island of Eigg, with the monastic buildings on the side facing Arisaig. It had become a large community by the date of the massacre-fifty-two is the number of monks given in the record, although for some unknown reason only fifty names are listed. It has been suggested that the monks are fictional but Dr Scott was sure he had traced local place-names deriving from them. Did Donan cross from lreland with the nucleus of such a group ready formed? Did he start with one or two and build to over fifty? Any answer to such questions would be as vague as the reason for the sudden unprecedented attack. On this subject scholars have made much of an obscure statement in the martyrologies that the monks' keeping sheep on the island hadangered a local woman of importance. Scott draws the unwarranted conclusion that when the local folk refused to take action she deliberately bribed a group of pirates to make the attack. It cannot, of course, be proved that she did not do so, so the reason for the brutality must remain conjectural. Pirates were by no means unknown but it is doubtful that they would take time to raid an obscure, penniless and inoffensive group of monks. It is more likely to have been a very early group of 'Black Gentiles' from Jutland or Denmark.

Details of the raid differ. Donan, it is said, was celebrating the Sacrament when the intruders broke in. When he begged for respite till mass was completed, they agreed and he led the monks across to the refectory 'that the place where God had been worshipped in spiritual joy might not be polluted with their blood'. The Martyrology of Donegal then states that 'he was beheaded and 52 of the monks with him' while that of Oengus suggests that the building was set on fire and they all perished in the flames. The traditional year of the massacre was 618.

Donan's festival is 16 or 17 April. From the book SAINTS OF SCOTLAND by Edwin Sprott Towill, publishers: St. Andrew's Press.