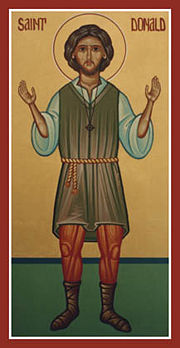 All that is recorded of this saint, whose name is so common in Scotland, is that he lived at Ogilvy in Forfarshire in the eighth century, that his wife bore him nine daughters, and that on her death they formed a sort of community who led the religious life under his direction. But if no more is known of him, he has nevertheless left his mark otherwise, for the often found natural features, wells, hills, and so on, which are known as the "Nine Maidens", are so called in memory of his daughters. They are said to have afterwards entered a monastery founded by St. Darlugdach and St. Brigid at Abernethy, and were commemorated on July 18. The popularity of the name in Scotland must be attributed, not to veneration for the saint, but to the ubiquity of the sons of Somerled of the Isles, clan Donald. His feast day is July 15th.