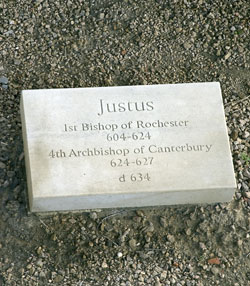 Benedictine archbishop of Canterbury. Justus was a Roman sent by Pope St. Gregory I the Great in 601 to England, to evangelize the Anglo-Saxons. Justus and others were sent as aides to St. Augustine. In 604, Justus was consecrated the first bishop of Rochester. The death of King Ethelbert in 616 caused a rise in paganism, and Justus returned to Rome. In the following year he went back to England and became archbishop of Canterbury in 624. He consecrated St. Paulinus.

Continue reading about Justus of Canterbury