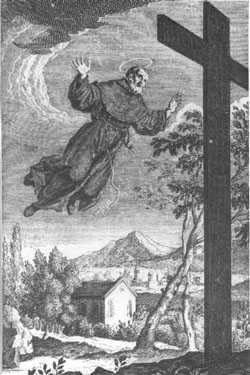 St. Joseph was born at Cupertino, in the diocese of Nardo in the Kingdom of Naples, in 1603. After spending his childhood and adolescence in simplicity and innocence, he finally joined the Franciscan Friars Minor Conventual. After his ordination to the holy priesthood, he gave himself up entirely to a life of humiliation, mortification, and obedience. He was most devoted to the Blessed Virgin Mary and promoted devotion to her among all classes of people.

His mother considered him a nuisance and treated him harshly. Joseph soon became very slow and absent-minded. He would wander around, going nowhere, his mouth gaping open. But he had a bad temper, too, and so, he was not at all popular. He tried to learn the trade of shoemaking, but failed. He asked to become a Franciscan, but they would not accept him. Next, he joined the Capuchins, but eight months later, they sent him away because he could not seem to do anything right.

He dropped piles of dishes and kept forgetting to do what he was told. His mother was not at all pleased to have the eighteen-year-old Joseph back home again, so she finally got him accepted as a servant at the Franciscan monastery. He was given the monks habit and put to hard work taking care of the horses.

About this time, Joseph began to change. He grew more humble and gentle, more careful and successful at his work. He also began to do more penance. Now, it was decided that he could become a real member of the Order and start studying for the priesthood. Although he was very good, he still had a hard time with studies. The examiner happened to ask him to explain the only thing he knew well, and so he was made a deacon, and later a priest.

After this, God began to work many amazing miracles through St. Joseph. Over seventy times, people saw him rise from the ground while saying mass or praying. Often he went into ecstasy and would be completely rapt up in talking with God. He became so holy that everything he saw made him think of God, and he said that all the troubles of this world were nothing but the "play" battles children have with popguns.

St. Joseph became so famous for the miracles that he was kept hidden, but he was happy for the chance to be alone with his beloved Lord. On His part, Jesus never left him alone and one day came to bring him to Heaven. Pope Clement XIII canonized him in 1767. He is the patron saint of air travelers, pilots and the mentally handicapped.

It is said that the life of this saint was marked by ecstasies and levitations. The mere mention of God or a spiritual matter was enough to take him out of his senses; at Mass he frequently floated in the air in rapture. Once as Christmas carols were being sung, he soared to the high altar and knelt in the air, rapted in prayer. On another occasion, he ferried a cross thirty-six feet high through the air to the top of a Calvary group as easily as one might carry a straw.

The people flocked to him in droves seeking help and advice in the confessional, and he converted many to a truly Christian life. However, this humble man had to endure many severe trials and terrible temptations throughout his life. He died on September 18, 1663.

Prayer of St. Joseph of Cupertino

O Great St. Joseph of Cupertino who while on earth did obtain from God the grace to be asked at your examination only the questions you knew, obtain for me a like favour in the examinations for which I am now preparing.
In return I promise to make you known and cause you to be invoked.
Through Christ our Lord.
St. Joseph of Cupertino, Pray for us.
Amen.

Hi readers, it seems you use Catholic Online a lot; that's great! It's a little awkward to ask, but we need your help. If you have already donated, we sincerely thank you. We're not salespeople, but we depend on donations averaging $14.76 and fewer than 1% of readers give. If you donate just $5.00, the price of your coffee, Catholic Online School could keep thriving. Thank you.
Help Now
Continue reading about St. Joseph of Cupertino