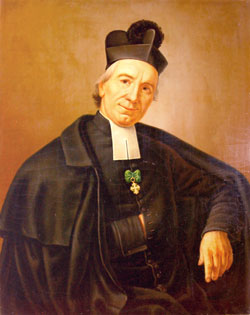 Joseph was born at Bra, near Turin, Italy. He was ordained and engaged in pastoral work. When a woman he attended died from lack of medical facilities for the poor in Turin, he opened a small home for the sick poor. When it began to expand, he organized the volunteers who had been manning it into the Brothers of St. Vincent and the Daughters of St. Vincent (Vincentian Sisters). When cholera broke out in 1831, the hospital was closed, but he moved it just outside the city at Valdocco and continued ministering to the stricken. The hospital grew and he expanded his activities to helping the aged, the deaf, blind, crippled, insane, and wayward girls until his Piccola Casa became a great medical institution. To minister to these unfortunates, he founded the Daughters of Compassion, the Daughters of the Good Shepherd, the Hermits of the Holy Rosary, and the Priests of the Holy Trinity. Weakened by typhoid he had contracted, he died at Chieri, Italy, and was canonized in 1934. His feast day is April 30th.