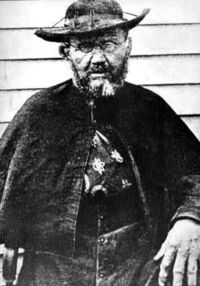 Joseph was born at Tremeloo, Belgium, on January 3. He studied at the College of Braine-le-Comte, and in 1860 joined the Fathers of the Sacred Hearts of Jesus and Mary (the Picpus Fathers), taking the name Damien. At his request he was sent as a missionary to Hawaii in 1864, was ordained the same year in Honolulu, and spent the next nine years working to evangelize the peoples of Puno and Kohala. In 1873, again at his request, he was sent to the leper colony at Molokai and spent the rest of his life ministering to the lepers. He contracted the dread disease himself in 1885 but continued to live and work with and aid the lepers until his death on Molokaw on April 15. Thopugh he was often slandered during his lifetime, his holiness and dedication were quickly recognized after his death (Robert Louis Stevenson wrote an impassioned defense of his character in 1905), and he was declared Venerable by Pope Paul VI in 1977.