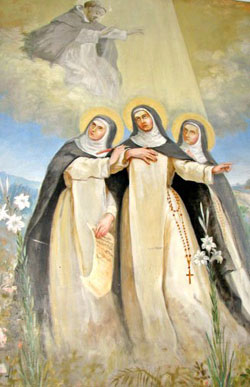 A member of the d'Andalo family, Diana was born near Bologna Italy, and convinced her father to withdraw his opposition to the founding of a Dominican priory on land he owned in Bologna. Dominic received her vow of virginity, but she was forced to remain at home by her family. Later she joined the Augustinians at Roxana but was forcibly removed from the convent by her family. She was injured in the struggle but later escaped and returned to Roxana. Sometime later Blessed Jordan of Saxony convinced the family to found a Dominican convent in 1222 for her, staffed with Diana and four companions and four nuns brought from Rome, two of them Cecilia and Amata. Diana died on January 9, and when Cecilia and Amata died, they were buried with her. All three were beatified in 1891. Feast day is June 9th.