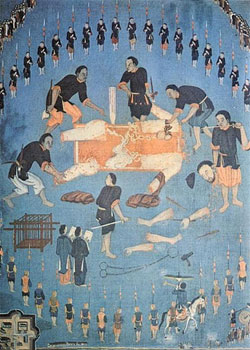 Martyr of Vietnam. He was born in Loudon, Poitiers, France. and joined the Paris Society of Foreign Missions. Sent to Vietnam he worked there until his arrest after being denounced as a Christian by a bandit. He was kept in a cage for months and subjected to hideous cruelties before being beheaded. Pope John Paul II canonized him 1988.