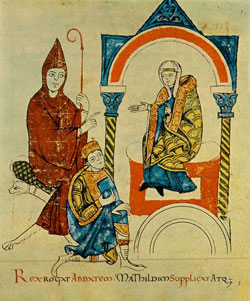 Benedictine abbot and one of the most influential men of his era. He was born the eldest son of the Count of Semur, France and entered Cluny Abbey, France, at the age of fifteen. He was ordained at twenty, and elected abbot at twenty five. Hugh succeeded St. Odilo in this office. He attended the Council of Reims, supported Pope St. Leo IX's efforts at reform, and in 1057 served as a papal legate negotiating a peace between King Henry IV and King Andrew I of Hungary. In 1059, he aided Pope Nicholas II and then Pope Gregory VIII. Hugh mediated the feud between the Holy See and King Henry IV Cluny, then the largest church in Christendom, was blessed by Pope Urban II. Hugh also founded a hospital for lepers and preached the First Crusade. He died at Cluny having served as abbot for six decades, and was canonized in 1120.