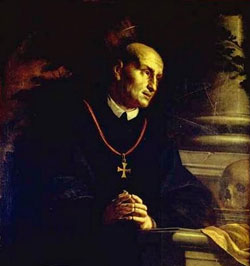 A monk at Cluny, Odilo was named abbot in 994. He practiced great austerities, and sold church treasures to feed the poor during a famine in 1006. During his abbacy, he increased substantially, the number of abbeys dependent on Cluny, and with Abbot Richard of Saint-Vanne was responsible for the acceptance in France of "the truce of God" and the rule guaranteeing sanctuary to those seeking refuge in a church. He was devoted to the Incarnation and the Blessed Virgin. He inaugurated All Souls' Day with an annual commemoration of the departed faithful, and experienced ecstacies. Ill the last five years of his life, he died while on a visitation of his monasteries at a priory at Souvigny on January 1. He had been abbot for more than fifty years. His feast day is January 1.