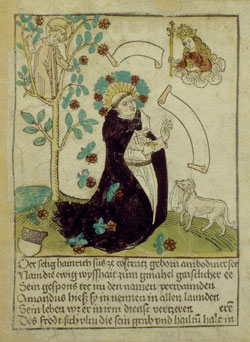 Famed German Dominican mystic wrote many classic books. Born Heinrich von Berg in Constance, Swabia, he entered the Order of Preachers, the Dominicans, at an early age. Undergoing a conversion, he developed an abiding spiritual life and studied under Meister Eckhart in Cologne from 1322-1325. He then returned to Constance to teach, subsequently authoring numerous books of spirituality. As he supported Meister Eckhart  who was then the source of some controversy and had been condemned by Pope John XXII in 1329  Henry was censured by his superiors and stripped of his teaching position. He subsequently became a preacher in Switzerland and the Upper Rhine and was a brilliant spiritual advisor among the Dominicans and the spiritual community of the Gottesfreunde . He endured persecution right up until his death at Ulm. Pope Gregory XVI beatified him in 1831.