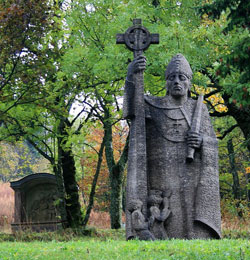 An Irish monk, St. Kilian was consecrated Bishop, went to Rome with eleven companions in 686, and received permission from Pope Conon to evangelize Franconia (Baden and Bavaria). He was successful, with two followers - Colman, a priest, and Totnan, a deacon - in his missionary endeavors until he converted Gosbert, Duke of Wurzburg, who had married Geilana, his brother's widow. According to legend, while Gosbert was away on a military expedition, Geilana is reputed to have had the three missionaries beheaded when she found that Gosbert was going to leave her after Kilian had told him the marriage was forbidden by the Church. His feast day is July 8th.