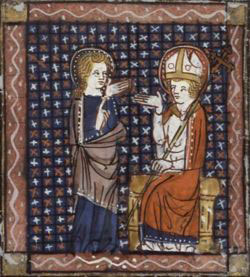 St. Brice was raised by St. Martin of Tours at Marmoutier and also known as Britius. He became a vain, overly ambitious cleric, holding Martin in great contempt. Despite Brice's attitude, Martin was most patient with him, and in time, in great remorse, he asked Martin's forgiveness for his attitude toward him. He succeeded Martin as Bishop of Tours in 397 but reverted to his old ways, neglected his duties, was several times accused of lackness and immorality. Though cleared of the latter charge, he was exiled from his See. He went to Rome and in the seven years of his exile there, repented and completely changed his life style. When the administrator of his See, in his absence died, he returned and ruled with such humility, holiness, and ability, he was venerated as a saint by the time of his death. His feast day is November 13th.