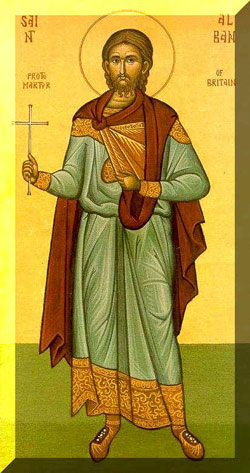 St. Alban was the first martyr of England, his own country (homeland). During a persecution of Christians, Alban, though a pagan, hid a priest in his house. The priest made such a great impression on him that Alban received instructions and became a Christian himself.

In the meantime, the governor had been told that the priest was hiding in Alban's house, and he sent his soldiers to capture him. But Alban changed clothes with his guest, and gave himself up in his stead. The judge was furious when he found out that the priest had escaped and he said to Alban, "You shall get the punishment he was to get unless you worship the gods." The Saint answered that he would never worship those false gods again. "To what family do you belong?" demanded the judge. "That does not concern you," said Alban. "If you want to know my religion, I am a Christian." Angrily the judge commanded him again to sacrifice to the gods at once. "Your sacrifices are offered to devils," answered the Saint. "They cannot help you or answer your requests. The reward for such sacrifices is the everlasting punishment of Hell."

Since he was getting nowhere, the judge had Alban whipped. Then he commanded him to be beheaded. On the way to the place of execution, the soldier who was to kill the Saint was converted himself, and he too, became a martyr.