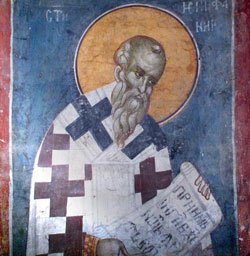 The "Oracle of Pal­estine' the bishop of Constantia, Salamis, Cyprus. He was born in Besanduk, Palestine, in 315, and he became an expert in scriptural languages. He spent time as a monk and as a hermit. In 333, he was ordained and made the abbot of a monastery at Eleutheropolis. He became the bishop of Cyprus in 367, a foe of the Arians. After a series of dis­putes, Epiphanius concentrated on writing. He was an authority on Mary and taught the primacy of Peter among the Apostles. He is considered an outstanding Church defender.