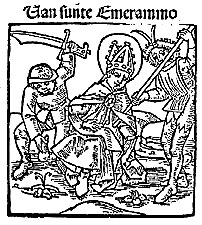 Bishop and martyr. A native of Poitiers, France, Emmeramus went to Bavaria, Germany, at the request of Duke Theodo. He became a Benedictine and abbot of Regensburg Monastery and then bishop of that city. On a pilgrimage to Rome, he was attacked by hired assassins at Kleinhelfendorf, near Munich, Germany Duke Theodo appears to have been the source of the assassination. Emmeramus is venerated as a martyr in Regensburg, where his relics are enshrined.

4 1/2" St. Francis of Assisi Pewter Statue on Base